My my my hasn’t it been warm so far in July? Those poor people who have to work in offices then make their way home on buses or the tube – don’t you pity them while you’re strolling around West Dean Gardens gazing on the bucolic South Downs scenery whilst taking in the more recent work of the gardens team.

Nothing to report in the way of rain, less than an inch fell during June which is great for garden visiting but not so great for garden growth. There is a marked difference in the degree of growth this summer than in recent summers. The roses have been astonishingly beautiful during the rain and wind-free flowering period this year.

On the subject of roses you will have noticed the two borders in the fruit garden which are devoid of plants. This was the previously the rose border which was planted in 1994 with a mixture of roses and herbaceous plants. Some of the latter were making a bid to rule the world and a few of the rose varieties proved to be less than thrifty. Hence the decision to make a clean sweep and start again in 2016, whilst spending this year controlling the pernicious plants.

The cutting garden is looking fantastically floriferous which is only right and proper. This year we are trialling calendulas and it’s interesting to see the range of colours and dimensions available. My favourite is still ’neon’ and the dear old pot marigold – calendula officinalis. Dahlias are starting to colour up and so are many of the nearby perennials and annuals. Many plants lend themselves to the cutting garden and it’s always interesting to see a different take on it as the season progresses.

Anne the border queen continues to keep the floristic borders and climbers under control. After her big push on staking in May – June she focuses on weeding and tying in at this time of year. Whether she’s up a ladder or using the nifty lift, none of the climbers escapes her eagle eye. The roses and clematis are looking particularly wonderful this year under her care. The borders which are designed to produce summer to autumn colour are beginning to flower their socks off and some of the scent wafting around the place is divine. 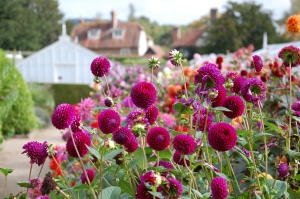 The ‘Woodies’, Stu and Will – after a stint of apple thinning,where the abundant fruit is reduced in a cluster to one and each spaced evenly along a branch – are bringing order to the chaotic summer growth on the trained fruit and hedges. It’s an endless round of keeping plants within boundaries so that their trained shapes set off the beguiling free-form plant growth that surrounds them.

Alongside these tasks they take charge of thinning bunches of grapes by hand, picking off 50-60 per cent of grapes within each bunch in the vineries to allow the grapes to swell evenly and avoid the development of diseases.

Jack the border patrol man is still keeping the glory of the garden standards high and is helped as usual by two to three volunteers each day. Now that the allium bulb displays have virtually finished flowering, hydrangea flowers are making an appearance with agapanthus not far behind. It;s all part of the summer scenery here at West Dean.
Sarah Wain, Garden Supervisor

West Dean Gardens is part of the Edward James Trust. An educational trust Charity No. 6689362. www.westdean.org.uk/gardens. 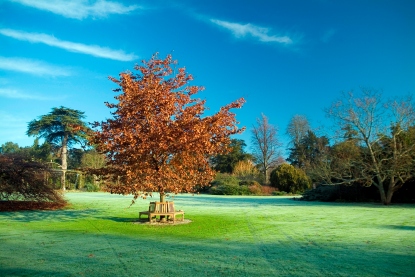 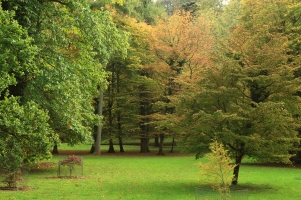 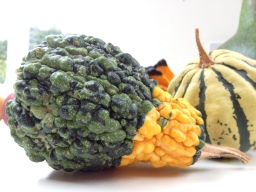 Autumn walks through the arboretum 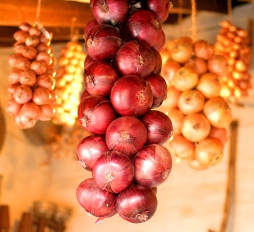